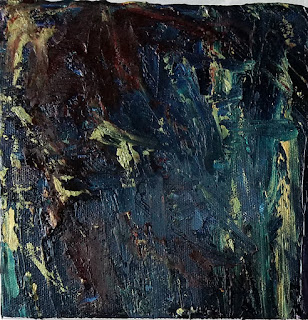 I have been painting with cold wax medium and oil paints lately in addition to the encaustic.  It is so much fun! What I am enjoying about the medium is the way I can really build texture and maintain the evidence of the mark making.  I love the addition of the wax to the oil paint.  It gives a lovely wax sheen to the paint while still retaining the beautiful characteristics of oil.  The freedom to move quickly and assertively (sometimes aggressively) with the paint is a wonderful experience.  The immediacy of the medium is a refreshing change from the encaustic which requires an additional step of adding heat to the process of painting (for those of you who are unaware of the encaustic process, it requires a fusing process of heat to bond the layers of wax as you paint).

The medium also helps express my concepts of fragility with the wax component of the paint.  Natural and organic, wax, being more of a fragile medium, mirrors the frailties of the human body. With encaustic…
Post a Comment
Read more
November 21, 2017 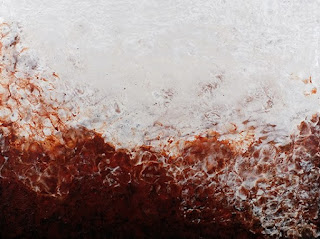 I've been thinking about my materials, specifically my Adam Series which was created a few years ago.  Twenty-five pieces: five - 30"x40"x1.5", 5 - 36"x6"x1.5", 15 - 8"x8"x1.5".  These works absractly expressed the moment of the creation of humankind. I symbolized this creation with five colors that typified human skin: brown, black, red, yellow, and pink/peach (shown in the pictures).


I painted the pieces with encaustic (bees wax, damar, and pigment) and dirt.  The dirt represented the earth from which God used to form us in His image.  I tried to match the dirt with the pigment to create a unity within the pieces but found that some dirt needed to contrast the hues so some of the works have darker dirt within them.  The paint created the unity within the dirt so the pieces harmonized color-wise.
The work was created using the skin tones on the bottom of the boards while white was used at the top to represent God.  The blendi…
Post a Comment
Read more
November 17, 2017
11-17-17


Here's a response to an artist friend towards a conversation we had about abstraction vs. realism. Thought I'd share: It is important to know what to include and what not to include within a work of abstraction. For how does the artist communicate a feeling or emotion? How does one break the human experience into a non-literal, visual language? That is a challenge to abstract artists - To express the essence of the human experience. The language of art is not just about reproduction, it is about the expression of the human condition.
Susan M Gibbons - artist/educator
Post a Comment
Read more
More posts